In case you haven’t heard… The government has proposed a new Lower Thames Crossing that will run from the M2 in Kent to the M25 though Thurrock, Essex. The new crossing being proposed is to help improve congestion. They also aim to create alternative routes as well as support growth, including new homes and jobs for people in Essex and Kent.

Since the campaign for the new crossing campaign started in 2009 there has been a lot of mixed opinions, mainly and at a cost of around £5 billion, is it worth it?

In 2013, a consultation took place to discuss the possible crossing and the effects it may have, the feedback showed there is a mixed reaction from the public. The main point made was congestion and the existing crossing needs to be addressed, even those who didn’t agree with the new crossing agreed with this point. When it came to those who disagreed, two main suggestions were removing payment booths and encouraging freight transporters to utilise the rail network. Additionally, there seems to be a lack of evidence to prove that it would help improve congestion, as well as different locations further west being considered.

Some Thurrock Politicians aren’t happy with the idea of another Thames crossing in their area. If the Lower Thames Crossing was to go ahead it would mean hundreds of people would be forced to sell their properties to the government and relocate. Aside from the local populated areas, over 100 acres of green belt would be affected, potentially destroying ancient woodlands and wildlife habitats.

Air quality in Thurrock seems to be a big issue and locals aren’t sure if another Thames crossing is going to help. Thurrock is one of the UK’s pollutions hotspots and has 4 major fuel storage depots, Tilbury Power Station, Tilbury Docks and a few more industrial processes such as Coryton Refinery and Proctor & Gamble. Surprisingly a lot of the air quality problems are caused by vehicle emissions, mainly because Thurrock is close to commuter routes such as the M25, A13, A128 and the A1089.

The Dartford crossing has a designed capacity of around 135,000 vehicles per day, but on most days it will exceed this amount. So with the current crossing operating over its intended amount each day, it’s obvious that something needs to be done. Commuters mainly use the crossing but around half the vehicles that use the crossing everyday are freight.

The Dartford Crossing is one of the most unreliable routes in the UK so with that amount of business being passing through and being delayed; it really puts a cap on productivity. In the last 15 years, Business in South East and London has increased by 50% and is likely to mimic that statistic in the next 15 years. The new crossing will create better trading access to the South East and Midlands, provide an alternate route for commuters and freight transporters, as well as opening up thousands of new job roles in Kent and Essex over years to come. So, with business always growing, the Thames Lower Crossing looks like the only viable option. 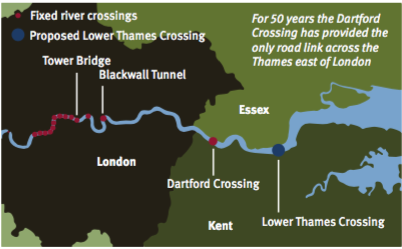 £470 million in reserve and counting…

Contracts, are they set in stone?