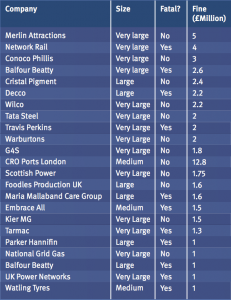 With Merlin Attractions leading the way for fines after the Alton Towers investigation, the table (left) shows the number of £1m plus fines over the past twelve months.

But the organisations that we believe are being hit hardest are being left with the most impossible of dilemmas when it comes to defending a HSE prosecution are the small and medium size organisations – facing prosecution for non-fatal incidents. Whilst the large organisation may save themselves £1m, £2m or even £3m by pleading guilty and gaining the requisite credit, a smaller organisation when faced with the same level of culpability and harm may be looking at a starting point and range in the guidelines which is:

• Daunting to say the least;

• has the ability to put the company out of business;

• is disproportionate to the level of offending; and

• the credit for pleading guilty is less significant.

This has led to an increase in the number of defended cases. The same cases in the pre-guideline era would have pleaded guilty and been dealt with in the Magistrates Court. A commercial decision would have been made by the managing director safe in the knowledge that the financial penalty was affordable, lessons had been learned and the blot on the record was just penance. Indeed, the HSE enjoyed a 98% success rate as a result of this type of thinking. Gone are the days when an organisation would plead guilty on the basis that it must be guilty because the HSE only took cases that it can win.

The guidelines have introduced a very real fear for small and medium sized organisations that even if they did plead guilty and obtain the requisite credit for the guilty plea they may still have to pay a fine where the starting point is £250,000 plus. A prospect that could put them out of business. Yes, there is a “step back” provision in the guidelines that enables the Judge to look at the financial position of the organisation – profitability, directors’ remuneration etc. but when the bottom of the range is £170,000 it is still a far cry from the average fine in the pre-

Indeed since starting this article it has come to my attention that Kentucky Fried Chicken must pay a £950,000 fine after two workers were scalded at separate branches. The restaurant chain pleaded guilty to two offences under the Health & Safety at Work Act and was ordered to pay £18,700 by way of costs. For your reference the facts are that a 16 year old member of staff was asked to remove a container of hot gravy from the microwave. He was not wearing protective gloves and sustained serious burns to his hands and arms. The second employee at a different branch sustained serious scalds to her body after hot gravy was spilled on her as she took a tub from a microwave.

Environmental health officers visited each restaurant and found that processes were not safely managed and the businesses had failed to ensure its own procedures were followed. In mitigation KFC advised that they had invested £7.5m a year in health and safety training including staff training. They added that the company’s procedures – though they we were not followed this time – ensured such accidents seldom occurred and that KFC had co-operated fully with the investigation.

This is a huge fine for gravy splash scalds and sends out a very clear message that employers need to ensure the health and safety of their workers.  Perhaps a review of your businesses insurance cover might be in order.