Skip to content
You are here
Home > Lifestyle > From field to plate, the perfect autumnal salad

It was Saturday 30th September, a crisp autumn morning with no rain. I had been looking forward to this day for many months and it was finally here. I had been invited to ‘Beat’ on one of the finest Partridge shoots in the South East of England the second week of the season, Venue Burroughs (Rugwood) Farm on Foulness Island in Southend on Sea.

John, Martin and Peter Burroughs have run their Partridge shoots for many years, They purchase and release over 10,000 partridges every year in preparation for the shoot.

At 9am the gentlemen who are going to shoot (known simply as the Guns) arrive in their huntsmen attire. John Burroughs (the Shoot Capitan) drives all ‘Guns’ to the first shoot known as a ‘Drive’, which was one of five drives that day. Myself and 8 others (the Beaters) including Peter Weddell were loaded into a trailer by Martin and driven to the other side of the shoot, our job was to lift the birds into flight. Armed with only small white flags we were dropped at several locations and were directed with military precision by Martin and each took our turns to walk forward at different paces.

Everything starts off very quiet but the closer you got to the guns the louder and more frantic it became. At the end of the beat, a loud horn is blown to signal the close of the shoot. The dogs who have sat so still and quiet then take over, their job is to collect all the Partridges and bring them directly back to their owners. The obedience and skill of these dogs is outstanding, it’s something I will never forget. The ‘Guns’ shot over 250 Partridge that day, which are then distributed to local butchers, oh and luckily me.

I haven’t cooked a lot with Partridge recently, however, this gave me a new incentive to cook with this fantastic, lean and flavoursome meat. I tried wellington, confit, terrine however my favourite is this salad dish. The combination of the delicate game taste, sweetness of the pears and saltiness of the bacon is a perfect combination.

As game birds go, the meat itself is very mild and doesn’t need hanging for long periods. I found the best method is to cook the Partridge very quick and served medium rare, this gets the best flavour and texture. You can slow cook for a long time, this would make a very delicate stew.

The hospitality I received from the brothers at Rugwood was very welcoming and I would recommend to anyone thinking about shooting, few clay pigeon lessons with these very skilled professionals would be aperfect place to start. In my opinion, this would make a great corporate team building day. 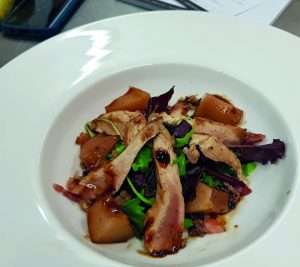 1) Peel and core the pears.

3) Simmer for 20 minutes roughly until the pears are soft

4) Remove from boil and allow to cool.

5) Check the partridge breasts for feathers and shots.

6) Cut the bacon into strips

7) Chop the shallot and garlic finely.

9) Fry the bacon in a small amount of oil. Once crispy, remove the bacon and place onto

kitchen tissue. Save the oil in the pan.

10) Place the partridge into the same pan and oil. Add the shallot and garlic and cook for two

minutes on each side.

11) Remove from the pan and keep warm.

12) Deglaze the pan with the pear juice and reduce. Stir until a syrup consistency forms and

14) Add the leaves onto into the centre of a plate or bowl, lean the sliced partridge around

15) Place the pears between the partridge slices and drizzle the glaze over the salad.

16) For a bit of texture, you could add croutons or pine nuts.

This dish would also work very well with any of the feathered Game. But be careful not to over

cook as the lean texture of the meat will become

Why Chardonnay is back in vogue