It’s only when a claim arises that the true quality of any insurer is properly tested; and time and time again, Lloyd’s of London has risen to challenges of the most extreme kind. San Francisco earthquake in 1906; the sinking of the Titanic  in 1912; and the 9/11 attacks on the World Trade Center. In every case, they met acute needs with fast, decisive action to get every valid claim paid.

Thankfully, not all claims are this extreme – but each still needs urgent attention to help businesses trade and flourish, and get people back to their normal lives.

In this two part article we take a look at some of the most noteworthy catastrophes and claims that Lloyd’s has been involved with.

A massive earthquake, measuring 8.25 on the Richter scale, brought the city to its knees. It sparked uncontrollable fires that raged for three days, taking several thousand lives and leaving half of the population homeless. The 1906 earthquake is important in the history of Lloyd’s because it had a profound effect on the insurance industry of today. The aftermath of the disaster laid the foundations for many of today’s modern risk modelling and building practices.

The San Francisco quake was also a key point in the life of the eminent Lloyd’s underwriter, Cuthbert Heath, whose actions during the rebuilding of the city solidified Lloyd’s position in the US market and helped pave the way for Lloyd’s as we know it today.

Through its prominent underwriter, Cuthbert Heath (some remembering him fondly as C.E. Heath), Lloyd’s played an important part in the San Francisco earthquake of 1906. Not only that, the aftermath of the quake had a dramatic and lasting effect on Lloyd’s and the insurance industry as a whole. During this era, governments were not expected to supply relief funds, so the burden of losses fell on the insurance industry.

As one of Lloyd’s leading earthquake underwriters at the time, Heath faced an enormous bill, but he honoured it and famously instructed his San Franciscan agent to “pay all of our policyholders in full, irrespective of the terms of their policies”.

The earthquake ended up costing Lloyd’s over $50m – a staggering sum in those days and equivalent to more than $1bn in today’s dollars. 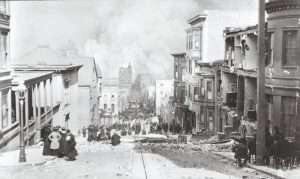 How the San Francisco earthquake changed Lloyd’s and the insurance industry?

Heath’s attitude over the San Francisco claims was rewarded, to the benefit of the London insurance market. His actions had highlighted Lloyd’s excellent reputation for paying valid claims – a reputation that still stands today – and business boomed.

Until the 1906 earthquake, the placement of insurance risks overseas was viewed with some wariness. Now, Heath had succeeded in cementing Lloyd’s position in the US market and other markets would be sure to follow. The losses incurred challenged existing perceptions about risk and its management, but it also saw the industry embrace advances in these fields as a result. There are now sophisticated building and risk modelling practices in place that help protect against the devastating effects of natural disasters.

In most cases, earthquake risk is still excluded from standard homeowners or business insurance policies in the US. However, fire resulting from an earthquake has been included in the majority of policies since 1906.

Just as there are lessons to be learnt from the earthquake, there’s also inspiration to be gained from the way that cities can be reborn with the help and financial backing of the insurance industry.

On 14 April, 1912, the spectacular Titanic – at the time, the most luxurious ocean liner ever built – collided with an iceberg during her maiden voyage.

She went down in the freezing waters of the North Atlantic, 375 miles from Newfoundland, in just two hours and 40 minutes. She carried 2,224 passengers and crew, but had lifeboats for only 1,178 people; slightly more than half. 1,514 people died.

It was a human disaster on a colossal scale, but it’s also a story with strong links to the history of Lloyd’s, where the ship was insured for over £1m.

At the time of the disaster, the market – and the media – was still in the early stages of using wireless telegraphy to communicate with ships at sea. Lloyd’s was a significant contributor to the new technology and, with the help of inventor Guglielmo Marconi, had set up signal stations from Cornwall to Canada so that vessels crossing the Atlantic could communicate with land.

Some thought the great ship had survived

The Lloyd’s signal station in Halifax, Nova Scotia, was called Cape Race, and was the first to hear the news that the ship was sinking. Other signal stations issued conflicting reports, resulting in great confusion. Two days later, some newspapers still thought the Titanic had survived, and was being towed to Halifax.

Lloyd’s, however, understood the situation. Underwriters began to trade ‘overdue insurance’ – a form of reinsurance commonly purchased after a marine incident.

The Chicago Record Herald of 16 April conveyed the market’s heightened emotion under the headline ‘Lloyd’s near to panic’: ‘Exciting scenes were witnessed at Lloyd’s underwriting rooms yesterday. Insurance losses in the last six months have been unparalleled in the history of Lloyd’s in liners of the biggest class. Both the Delhi and the Oceana have been wrecked, and now comes the disaster to the Titanic…’

Back on 9 January, broker Willis Faber & Co had come to Lloyd’s underwriting room to insure the Titanic and her sister ship, the Olympic, on behalf of the White Star Line.

It was considered a prestigious risk, with cover for the hull alone standing at £1m – around £95m in today’s money. Numerous Lloyd’s syndicates put their names on the slip, covering amounts ranging from £10,000 to £75,000. Willis was able to negotiate a favourable premium for this proudly ‘unsinkable’ vessel of just £7,500. Despite the high levels of claims arising from the tragedy, insurers paid out in full within 30 days.

The 9/11 attacks were a series of four co-ordinated terrorist attacks, launched by the Islamic group al-Qaeda, on the US, in New York City and the Washington DC area.

Four passenger airlines were hijacked by al-Qaeda terrorists and flown into buildings in suicide attacks. Two of these planes, American Airlines Flight 11 and Flight 175, were crashed into the North and South towers, respectively, of New York’s World Trade Center complex. Within two hours, both towers had collapsed, with resulting fires causing partial or complete collapse of the other buildings in the complex. Nearly 3,000 people died in the four attacks.

The events changed the world’s perception of risk. In its 320-year history, the Lloyd’s market had seen many disasters – but nothing could prepare the industry for September 11, when the world watched in horror as the Twin Towers burst into flames, a plane flew into the Pentagon and the last, diverted by passengers, exploded in a field in Pennsylvania. 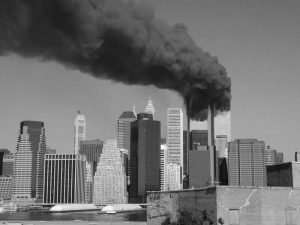 A personal and professional tragedy

9/11 was a personal and professional tragedy for many in the industry who lost colleagues and loved ones. Brokers Marsh and Aon had offices in the tower, and both companies felt the pain of the attacks acutely. Through an online memorial, Marsh remembers the 295 colleagues and 63 consultants it lost on 9/11, while through a legacy website and the Aon Memorial Education Fund, Aon remembers the 176 colleagues it lost. The fund was established in 2002 to provide post-secondary educational financial assistance to the dependent children of Aon employees killed.

‘There was a tremendous amount of unsettled feeling across the whole global financial system, underpinned by the high emotion caused by the tragic loss of so many people,’ says Julian James, CEO of Lockton International, who was Lloyd’s Director of Worldwide Markets at the time of the attacks. ‘The insurance industry had never had to cope with an event that touched it so personally.’

As the market got to work to process a steady stream of claims, it became clear how significant an insurance loss the market was dealing with. 9/11 was Lloyd’s largest-ever single loss and it impacted many different classes of business. Before 9/11, it had not been envisaged that classes of insurance such as aviation and fine art could suffer major claims at the same time as property and casualty lines. These once unthinkable correlations were among the lessons learned from the attacks. Another major lesson was the necessity of contract certainty in the industry. It became clear that a dispute over whether the destruction of the Twin Towers had been one or two separate terrorism events would not have occurred had final policies been in place ahead of the attacks.

‘To any outsider, it must seem highly unusual that this single agreement should not be in place,’ said Lloyd’s Chairman Lord Levene, speaking in 2005. ‘The insurance industry owes it to its customers as well as to itself to ensure that cover is fully agreed and clearly documented right from the start.’

In the wake of the attacks, Lloyd’s syndicates paid out billions of dollars, settling scores of multimillion-pound claims from affected businesses, including airlines, airports and security companies, as well as from injured individuals and relatives of those killed. Months after the attack, as America began to try to rebuild itself and heal its physical and emotional wounds, US Treasury Secretary John Snow spoke movingly about the way Lloyd’s had supported the USA, declaring, ‘We are indebted to you.’

So for nearly over 300 years, the Lloyds of London market has been providing protection for some of the biggest catastrophes that the world has ever known.

With the premiums of the many paying for the claims of the few, the market will continue to assess risk, apply premiums and settle claims for years to come.

From Lloyd’s perspective, 9/11 will long be remembered as one of the market’s biggest losses alongside major natural and manmade catastrophes such as the loss of HMS Lutine in 1799, Hurricane Katrina and the Japanese earthquake and tsunami of 2011 which we will be looking at in the next issue.

£470 million in reserve and counting…